Although two of our “birthday brothers” ( Griz Bear and Ryno) were not here for birthday month, we were still able to celebrate the birthdays of Stefan ( Canadian Newbee), Bomba , Big Chris , and one of the chicas ( a special one) Yosie. It was a fun two week run.

One of the villas records, the most chicas in a guests bed at one time , was shattered this week. Stefan. ( who was given the name BIG PEPE by the chicas ) enjoyed a PARDEE HOUR with nine (9) chicas. Wow ! Talk about sensory overload. The previous record was held by a newbee also , Harold , who had read that it is good advice to break the ice by doing a PARDEE the first hour after arriving at the villas. But in the welcome party all of the girls looked so good in their bikinis and heels that he could not choose one. So he decided to ask ” OK, who would like to do a Pardee ?” He was surprised when all eight ( 8 ) of them jumped up and said ” Me ! Me ! ” What a welcome party. He took them all . And by doing so he broke the villas record , and also broke the king size bed. LOL But that record only lasted about 6 months , until BIG PEPE broke the record this month. But Bomba still holds the 24 hour record of twelve ( 12 ) chicas. Super human . And probably a record that will never be broken.

And speaking of records. Cliff ( Rag Top ) was here for his 22nd visit ( in 10 years ) . But this was his first visit in two years. He was “detoured ” by one of the new chicas at the villas , Zamira. But then, against Indiana’s advice (she is our resort manager and chica’s Mamasan) he went “all in ” and took her back top the USA to marry her. . Remember that “bad advice” is always free , but good advice is priceless.” If you listen. It did not go so well….two years and about $200K “invested ” ( by his estimate) it ended in a divorce. I hate to say it but, Indiana told you so brother. She really knows her S&$@T when you go the right way and ask her for advice. ( and listen). She is Dominican female, and “knows the lay of the land ” Pardon the pun.

NOTE There have been 59 chicas from the MWV Villas that have been either engaged or married to our guests since 2001. And a common question is ” Wow, how many have actually been a success ? ” My answer is always I don’t know , and I don’t want to know. You come to the villas for the best vacation of your life . Not to find a wife. -CAVEAT EMPTOR BUT I can say that on this trip Rag Top really enjoyed himself. FREE AGAIN ! And it is good to have you back with us again……

Big Chris was here for his third visit this year. And he is always a welcome guest. A class act. He celebrated his 29th birthday . Again . And he says he will be back in July for TEENIE BIKINI WEEKS. We are all looking forward to it. He and a good friend were so impressed with the “girlfriend persona” of the girls here at the villas ( and on the island in general ) that they decided to mount a new matrimonial agency and web site. But to be done with some excellent selection and supervision. If you are on our NEWSLETTER mailing list you will probably be hearing more about it. Matchmaking and hunting for a special mate in the DR is not a “do it yourself ” endevour. An instruction manual and consultation is definitely recommended.

Bomba was here to celebrate his 55th birthday .and his first yaer of retirement from the Fire Department. He is always the “party starter” and there is never a dull moment when he is in the villas. Instead of a birthday cake this year he wanted a birthday “human sundae” by one of the girls at the villas. A naked chica at the party with nothing on but some whipped cream, chocolate syrup, sprinkles, and candles that say “69”.

All of the guests at the party enjoyed the sweets. including many of the chicas . Not exactly a “lesbian act” but still pretty close. Just don’t choose a chica to be the sundae that is overly ticklish. Because there are no rules.

Pica was here for the celebrations . We were only missing Puma, Griz Bear, and Ryno . Geez . This sounds like a zoo. And that is not far from the truth on some weeks.

Also here early in the month was newbee BIG BEN ‘ He said a few hours after arriving ” You know , the girls are more beautiful here in person than their photos on the web site. ” Hmmm…… I think I have heard that before.

And much later in the month Crocodille Don D ( Papi Chulo ) made an appearance . And just in time to help us with newbee Steven who earned the nickname MR WONDERFUL . What is it about people from New York City ? They are just so “special ” . LOL . But the hockey game RANGERS / LIGHTENING was fun . And a great outing to Cabarete Beach.

June looks to be a relatively quiet month here. It usually is .It is a transition from winter season to summer vacation season. But the months of July , August , and September will be rocking with summer fun , and plenty of special events.

Oh yea ! I almost forgot. ( how could I forget THIS ? ) We signed the contract and bought our new beachfront property to build the new eleven ( 11 ) bedroom / suites tropical design villa THE ENDLESS SUMMER. The plans and artists renderings will be available in June.

And many of our VIP guests will be enjoying the benefits of ownership ( 20 stock holders ) and free vacations . Anyone that did not receive a prospectus ( it was sent to a few members / repeat guests ) can contact me for more information at : Thomas mwvinfo@yahoo.com This will be an exciting project . And a great investment opportunity for our members. It’s time to fire up Pica’s Margarita Machine and enjoy some quality beach time here at the villas. Have a good summer everyone.

“We have surpassed a new mile stone . More than 2000 active members !” 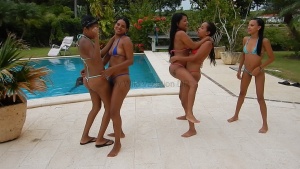